The company announced today that it has signed an agreement1 to sell its Darwin business, excluding the land it holds at Little Mindil, for A$188 million - a price slightly in excess of book value2.

Mr Stephens says the sale is a good outcome for SKYCITY, the resort’s staff, and the city of Darwin. “I’m really pleased that following a very competitive tender process Delaware North has emerged as the successful bidder. They are a highly respected and well-established hospitality and gaming company and I’m very comfortable handing over the business we have built up over the past 14 years to an operator of this calibre.’’

Mr Stephens says while the resort has been performing better financially over the past 12 months, SKYCITY’s future strategy had the company looking closer to its New Zealand home base and its expanding casino facilities in Adelaide.

“Selling was not an easy decision. We’re proud of our contribution to Darwin and the Northern Territory over the past 14 years. Since we purchased the business in 2004 we’ve developed Darwin’s casino into an integrated entertainment destination, refurbishing the resort, adding new restaurants, bars and VIP facilities, a new 5-star resort hotel and supporting various community events.

“So now feels like the right time to hand the baton across to a new owner to continue the next stage in Darwin casino’s journey,’’ Mr Stephens says. 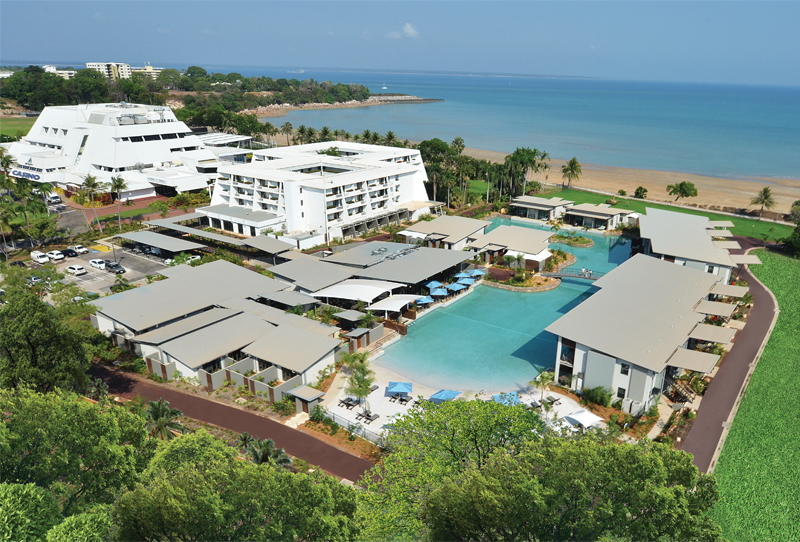 “Australia has been a second home for Delaware North for 30 years,” says Lou Jacobs, Co-CEO of Delaware North. “We are thrilled to have grown our business into a diversity of operations across the country, which has been possible because of our incredibly talented and diverse workforce of more than 10,000 people.

SKYCITY’s association with Darwin will continue for some time however, through the ongoing use of the casino’s VIP facilities for at least the next two years3 (subject to availability) and the company also retains the rights to operate an online casino in partnership with Delaware North should a licence be granted in the future.

“We see both International Business and the online space as future growth areas for us, so we see value in this outcome,’’ Mr Stephens says.

SKYCITY will also continue to own the beachfront Little Mindil site and will run a separate process to sell the prime waterfront site.

With the sale of the Darwin casino still contingent on matters,4 including the new owner gaining regulatory approvals in the Northern Territory, SKYCITY will continue running the business until regulatory approval is received. All the company’s 650 staff will be retained once the change of ownership takes effect.

“The sale is consistent with our “capital lighter” strategy to sell non-core assets and to allocate capital to assets and businesses which we feel are aligned with our long-term strategic objectives. As always, our top priority is to deliver attractive and sustainable returns for shareholders.

“It also allows us to concentrate our Australian activities in Adelaide, which is undergoing a A$330m expansion, due for completion in late 2020,” says Mr Stephens.

SKYCITY has not yet determined what it will do with the sale proceeds following completion, but there are a number of strategic initiatives being pursued that the company expects would generate returns above its cost of capital.